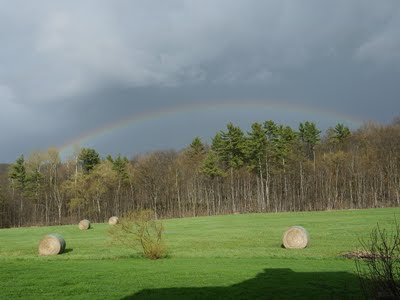 The size of the social world here is smaller, of course, than in Lexington, Massachusetts, but I feel that the network of connections is more intense.  Early on we heard about connections.  A carpenter who had a Westie too (“White Dog Cabinetry”) said he knew someone Ken’s son Bill knows over in Starksboro, some fifteen miles from here.  That was only a start.
Our contractor’s son-in-law happens to be a landscaper.  As our porch plan demands includes some shrubs, plus we want the garden roto-tilled, and a group of trees planted near the driveway, it was obvious how we found the person to do it.  When we decided to have some help cleaning this enormous place we got a name from the very savvy woman who dispenses advice at the Middlebury paint and decorating store.  The person she recommended turned out to be a cousin of the above landscaper.  The landscaper who, by the way, knows Ken’s son Bill.  The guy who came to fix our phone got here within ten minutes of my calling the local Telecomm service, as he lives two miles up the road.  When we sold our old stove on Craigslist last week (by which means it was snapped up as quickly as it might have been in Boston, quicker maybe) the buyer turned out to have once lived up the street at the sheep farm.  (More on the sheep farm later.)
That reminds me.  Nearly every workman who has been here, from our contractor to the local furnace/propane guy, has time to tell stories.  At first they don’t seem to have to say very much, but a comment or two gets them going.  Pretty soon we’re hearing stories, stories about animals they’ve had (pets), animals they’ve hunted, or stories of who did what when.  No one seems in a big hurry to get on with it.  You have to get used to the pace.  No need to rush around, right?
We arrived here with a leg up, socially, thanks to Lesley and Chris.  They had to get to know everyone without any foreknowledge when they moved here, although having kids helped, of course.  We all agreed that an Open House seemed like a good way to meet our neighbors.  So Ken and I were able to put together a proper guest list, taking our cues from the above locals.
Almost everyone showed up.  And what an interesting mixture it was.  Our nearest next door neighbor had shown up the day before, with a cake, as she wouldn’t be able to come on Sunday.  She might have been a mom from, say, Wellesley or Weston.  She hadn’t the faintest idea who mows our meadows, hers and ours.  Living along with two children, she mentioned how isolated she felt after the huge snows this winter, having to snowshoe to get to the end of her driveway, and no one available to plow.  (We exchanged phone numbers.) Oh, and she knows a friend of the aforementioned Bill.
The guests came from a wide range of experiences: the wife of farmer Don Hallock who once owned all this land (our eponymous road) and lived in the farmhouse further up the hill that is now in the hands of a family that is letting it decay; the matriarch of another many-generation farm family, mother of several local farmers (her sons) who own much of the area lands; one of those sons and his wife; a guy who runs marathons all over the world and just flew in from yet another; a horticulturist; a metal sculptor who has an upcoming exhibit somewhere; an executive for some company or other who makes maple syrup big time just for fun and brought us a half gallon; a young family with both parents working in Burlington; a few retired couples who’ve lived here for years; a biologist who wrote a book about Lake Champlain; the couple across the road and our nearest neighbors: she was a policeman, he works for a feed company; an elderly couple who, along with son and daughter-in-law, run the sheep farm, Treleven, up the road, and were in Bill McKibben’s book “Wandering Home.”  This weekend we all, especially children, are invited there to a “Lamb Frolic,” an annual event that features ice cream and cupcakes, and, of course, plenty of newborn lambs.


Today we went a step further in country living.  That is to say, we bought a tractor.  Not a huge tractor, mind you, but the kind of garden tractor that can deal with a really large area.  It can be equipped with a snowblower in the winter, in case our plow guy doesn’t get there when we need it.  Reassuring, that.  The person we bought it from at our local John Deere store (could you guess?) is the son-in-law of our neighbors, the Hallocks.
Posted by Norma at 3:05 PM 1 comment: