I was in Tirana.  Except for one vowel, the word could have been tyranny. Tyranny was about all I had known of Albania in the past.  A country with a nasty history, ruled by tyrants, without a beneficent government–ever. My first impressions were much brighter:  I noticed the liveliness of the streets, people filling tables at outdoor cafés, numerous restaurants, and newish apartment buildings here and there.  And the weather was the best of spring. The city felt benign, welcoming.  The current fashion of younger men with their punky haircuts, grizzled faces and tight leather jackets gave them a kind of dangerous look. If you saw someone looking like that in Vermont, you might step back. But this wasn’t Vermont.

This was the first leg of a trip through what was once Yugoslavia: Montenegro, Croatia, Bosnia-Herzegovina, and Slovenia.

It was only me and Nora, a Chinese lady from San Francisco, and our guide Klodi in Albania. Klodi’s story reveals a lot about Albania, although I didn’t learn all this until we’d spent a couple of days with him.

He told me he had trained as a veterinarian in a college in Tirana, one of the colleges that actually expects students to work at learning, as opposed to the other college for those who only want to buy a degree.  But Klodi said he never practiced as a vet for two reasons: the first was that Albanians don’t really care about animals; the second was that his professor owns all the veterinary clinics in the country, thereby eliminating the possibility of Klodi opening a practice of his own.  One could question this explanation, as to why study veterinary science in the first place, and so on, but we did not.

Klodi is married, his wife an elementary school teacher, and they have two children, one of which, only a few months old, was born with cystic fibrosis.  There is a single doctor in all of Albania who is able to treat this disease.  Klodi would like to move to Germany for the baby’s health, but at present this is only a hope.

He talked a lot about corruption in Albania–it was unavoidable as the physical results of it are everywhere–but shrugged his shoulders at possibilities of reform and change.  It goes so deep and has existed for so long.  When Klodi was a teenager in the late 1980’and early 90’s after the 1985 death of dictator Enver Hoxha and the years of unrest that followed he had a gun to protect his family. We didn’t ask if he ever used it.  We liked Klodi.  We didn't want to give him a hard time.

Two days before our arrival there had been an anti-government protest in Tirana, and there was another protest two days afterward.  The first was met by water cannons, but the second was peaceful.  Although our hotel was only two blocks away, daily life appeared to continue normally. The current president, a powerless figurehead compared with the prime minister whose resignation was the protestors' goal, offered to resign after the second protest.  The reaction to this was a collective shrug.

Klodi pointed out a tall building (it was hard to miss) just off the main square that looked as if it was under construction, complete with building crane.  It has looked exactly like this, he said, for fifteen years, crane and all. Construction projects like this are allowed to break ground without guaranteed financing.  So what stopped it?  Financing that fell through?  A shrug.  Maybe a bribe not paid.  Who knows?  Buildings are not taxed until they are completed. Hence the half-built, half-collapsed, often abandoned structures that litter the landscape. Yet there is money somewhere. Expressions of wealth abound in fanciful structures unconstrained by a lack of imagination. Expensive cars crowd the streets.  Outside of town shepherds stand around watching sheep. Why not just fence them in?  Why should a guy spend his time watching sheep? we wondered. Because someone would steal them, Klodi responded.  It is a poor country.  An average monthly salary, said Klodi, is about USD280.


Klodi told us a story about another building in Tirana, an odd-shaped concrete building with a roof that looks like a rippled skirt (a reference, maybe, to the traditional men’s costume– the "fustanella," meaning “put it all inside”– of both Greece and Albania).  It was envisioned as a marble monument to the late Stalinist dictator Hoxha (more on this later) and designed by his daughter, an architect. In the post-Hoxha years the monument idea never came to fruition. This was hardly surprising, given the antipathies he engendered among Albanians who survived his rule.  The building began to deteriorate. Perhaps, thought one governmental ruling party, it could become an arts center.  Good idea.  Scaffolding was erected.  Then there was a regime change.  The scaffolding came down, but, sadly, there had been no restoration.  Another regime change occurred, and this time it was decided the building would be destroyed.  But before that could happen, the regime changed once more. Scaffolding went up.  After a time the scaffolding was removed.  The building had not been restored.  But all the marble was gone.

Long ago in Albania there were the Illyrian and Greek tribes. Then the Romans arrived (mostly a good thing for infrastructure building and so forth), until Goths and the Huns put an end to the Romans.  Before you knew it it was the Middle Ages, a time when clans dominated the land, literally and figuratively (remnants of their domination can be seen as crumbling castles on mountaintops), followed by a sort of Venetian-Serbian Empire that then became part of the Ottoman Empire.  In 1912 Albania declared its independence, and after a few historical bumps, became a monarchy under a self-declared king known as King Zog.

King Zog, like other self-made leaders, did a few good things to start with, but spent a good amount of time and money working on his royalness. (He had Europe scoured for a lady of actual royal blood to wed and so enhance his own kingship.) Zog's downfall came along with World War II (he had sided with Mussolini) and the occupation of Albania first by the Nazis, then the Italian Fascists (no longer friends with Zog who fled), after which a promising Communist named Enver Hoxha was installed as leader. Unlike Communist Tito of the new Yugoslavia, Hoxha’s model was not so much Marx as Stalin, although perhaps Hitler could have served him as a model equally well. The years of Hoxha’s reign were a downhill slide into oppression. Albania became the North Korea of its time.  This is the Albania I remember reading about with amazement. Klodi pointed out the section of Tirana where Hoxha and his closest associates lived in fortified splendor, enjoying the luxuries of the west that were denied to everyone else. The country became a prison for its own people. He ordered concentration camps and death for those in opposition or for causing other annoyances. The national museum has a photo of Hoxha’s closest friend and minister, killed by two bullets to the heart, heedlessly dubbed a suicide.  Hoxha’s paranoia about invasion grew large–by this time he had alienated his only allies,Yugoslavia (Tito), Russia (Stalin), and China (Mao)–and, fearing invasion from somewhere or other, was moved to build bunkers all over the country. The bunkers were intended to protect soldiers, and were not for ordinary citizens. Hoxha died a natural death in 1985.


Out in the Country

Has all this been too negative?  I should mention that Albania seems to be a tolerant society.  Muslims and Catholics and Orthodox and various sub-sects all get along, said Klodi.  The tone for this may have been set in the early days of Ottoman rule when Christians were taxed more than Muslims.  The choice for Christians was obvious: become Muslim.  About 75% of the population today is Muslim, 20% Christian Orthodox, the rest Catholic, and miscellaneous. Klodi himself is Muslim, somewhat of a passive Muslim, his wife Catholic.  Mosques and churches often sit side by side. Throughout the Balkans, including Albania, Islam is practiced in a relatively relaxed style. 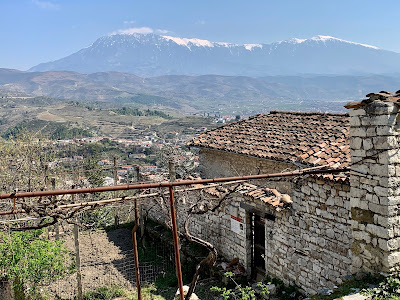 We visited the mountains, but did not penetrate very deeply into them.  I've read that two new long distance hiking trails exist that stretch from Slovenia south through the Balkans, but they appear to come to an end in Albania.  The Albanian mountains still hide some of this country's most ancient traditions and practices.  One of these practices that continues to this day is the blood feud between families that passes on through generations. If it happens that all the men in one feuding family have been killed by another feuding family, it is the duty of the oldest sister to become a "man" to continue the feud on behalf of her family.  This feuding is hard on children, especially the boys, all of whom must remained locked in the house all day and night if they are to live.  The government is too weak to put an end to such feuds.  Klodi said he recently saw a documentary on Albanian TV about these "men," and these feuds.  Although they once happened throughout Albania and now occur mainly in the northern mountains, this practice has an effect, he said, on the whole of society. 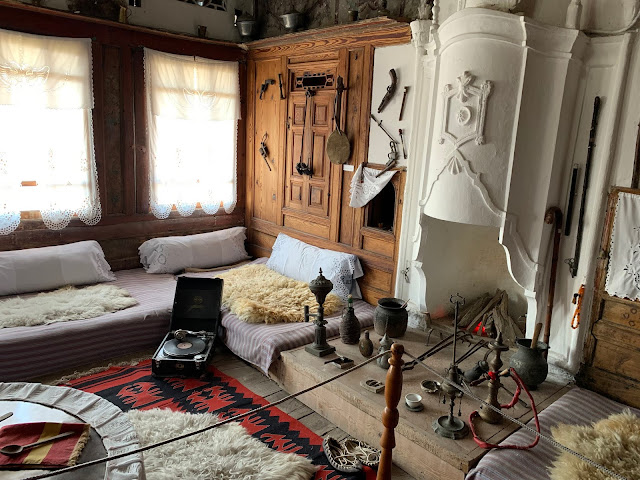 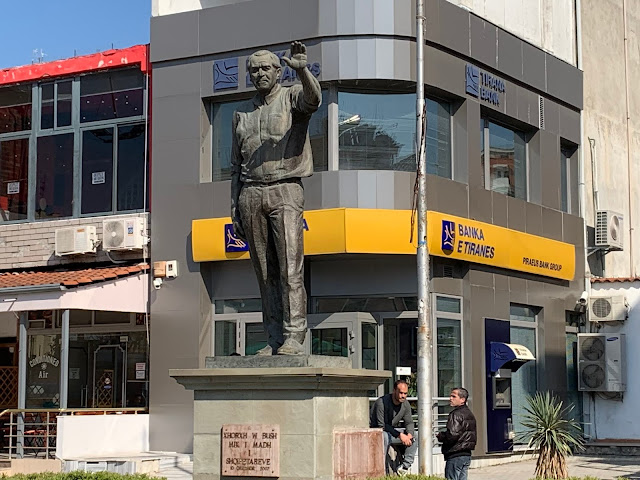 The town of Fushe-Kruje salutes George Bush!  Yes, really.  A statue of former president Bush, adorns the center of this town where Bush visited in 2007. He was the first US president to visit Albania.  Opposite the statue is a café named after him, and, in fact, the town very nearly changed its name to Bush. It's not a bad likeness. 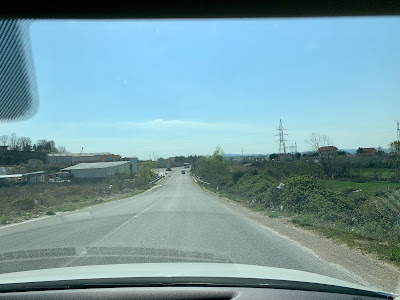 Unfortunately too many quasi-urban roads looked like this: no site planning or zoning, and plenty of trash on the roadside.  Yes, there are laws prohibiting the tossing of trash, but, like many government laws, they are not enforced.  Perhaps there is no will to enforce them, or to abide by them.  Maybe tossing trash feels like a form of freedom.


When we arrived at the border crossing with Montenegro there was already a bus parked there awaiting inspection.  The bus was headed for Germany, a long ride away.  It looked as if it had been parked there for a while.  Everyone had disembarked, and all the luggage had been taken off for inspection by a drug sniffing dog.  Luggage compartment, inside of the bus, and the passengers themselves were all sniffed.  By the time we made it through the border the passengers were still waiting to reboard.

The bus passengers may end up among the Albanian diaspora, joining the many who have left Albania in recent years to seek better lives elsewhere.  Last week, in the Boston airport lounge, while I was waiting for my flight, the bartender, waiter, and receptionist all were from Albania. At our turn to cross into Montenegro our passenger car's VIN was checked, carefully.
Posted by Norma at 12:12 PM No comments: