WAITING FOR THE SEEN, while the unseen happens 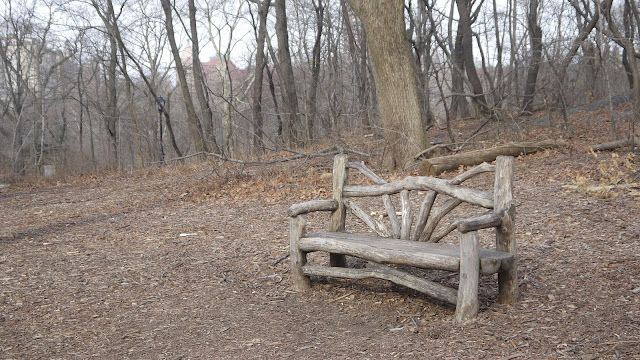 February is a waiting time. 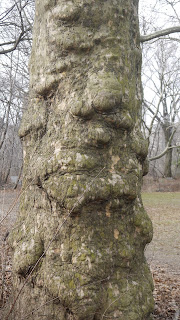 (The bench, above, is not even in Vermont, but an empty bench suggests waiting, doesn't it?  Since I've included the bench, I might as well include the tree that stood opposite.  I'll call it the Nose Tree.)

In a winter that has been seesawing back and forth between freeze and thaw, those of us who ski are waiting to learn the final score on this winter’s snow.  Will a late storm (just one big one, please, before it’s all over) give the winter of 2012/13 a statistical kick?  How much more skiing, snowshoeing, or plowing is there going to be?  If any.  As the snow melts away I miss the fresh tracks that hinted at who-did-what when we weren’t looking.  Evidence of the unseen.

◦             You may hear the loud drumming of single male pileated woodpeckers, advertising for females.  Once mated, a pair will remain together throughout the year.
◦             Sometimes crows gather in large groups at this time of year.
◦             Coyotes are sexually active.  Five to nine pups will be born from mid-April to May.

A guy in line at a store the other day was buying 100 maple tree taps.  He’s getting ready.  Sugarbush tappers are waiting for the first flowing of maple sap.  That should be any time now.  A few more warm days, around 40 degrees or so, with nights below freezing are all that’s needed.  We’ve had some of those already, although it’s still February.  Wood for the sap burn has long been cut and stacked.  In our little shack a new evaporating pan waits.

Dairy calves–Holsteins, Jerseys or a mix, mostly–are born here on dairy farms the year-round, but beef calves, kids and lambs are generally born in February and March.  Ewes and does become fertile as the day length decreases in the fall.  To me, an animal’s response to light in this way puts me more in mind of plants than animals. Pregnancy–gestation” is the term usually used for goats and sheep–lasts about five months.*  In the case of cows, it’s about nine months.

For local 4-H’ers (“4-H” signifying a union of activities for “head, heart, hands, and health”) it’s mostly about cows.  Now is the time for selecting the calf they will get to know for the next five-plus months and show at the county fair in August.  Since Ben, Audrey and Carly will each be doing this, I have an opportunity to observe the process.

◦             Wild turkeys seem to get braver as their food supplies dwindle.  They may venture into yards and orchards for spilled birdseed and fallen fruits.
◦             Skunks come out to look for mates, and sometimes can be heard squabbling in the night.  Baby skunks, usually six or seven, are born two months after mating occurs.

For farmers, 4-H is one more way to “gentle” their animals.  Calves used to handling by people will be less likely to spook and cause trouble.  “You wouldn’t stand in the middle of a bunch of cows like this with just any cows,” said the farmer (below) who knew the name of every cow. “My father always pays a lot of attention to his cows.  They (the 4-H’ers) help socialize them.” 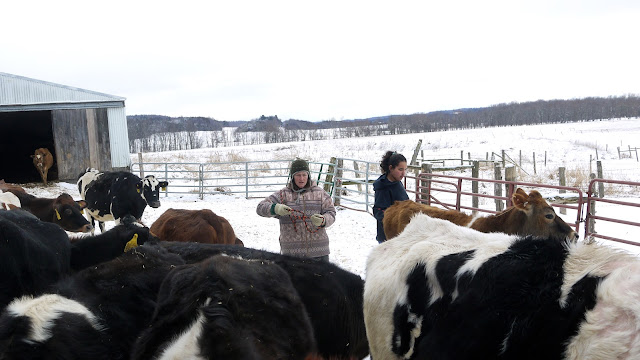 Young calves almost look like fawns.  They’re small and doe-eyed with long eyelashes.  Adult cows are immense.  It’s hard to notice lashes.  You have to pay attention to that size.  The daughter of someone we know who was training to be a farmer was kicked in the face by a cow and almost lost an eye.  Over a summer grazing cows demolished an old bench that sat under an apple tree in the field next door.  It’s not that the cows were aggressive toward it, but they probably merely leaned against it, or bumped or pushed it from time to time. They are big.

◦             Foxes will cache food caught during good hunting days in pits they dig in the snow.  Then it is covered over;
◦             Chickadee flocks are breaking up; listen for the two-note territorial song of the male–‘feebee’–the first note higher than the second;
◦             Acrobatic aerial courtship displays by ravens are under way.  Rolling, tumbling, and soaring are accompanied by the loud territorial call, a resonating ‘quork.’

I love it.  But lets say we are actually fuzzy and semi-adorable, why not? but we drive Subaru’s, for goodness’ sake, we wear fleeces and down vests, sweaters not so much, and the fleeces probably do smell of smoke, but that would be wood, not peat.  Must have been thinking of Ireland.  The stuff simmering in the background?  That would more likely be chicken stock, given where we are.  Somebody better invite the guy to Vermont.

* Excerpts in boxes are from The Place You Call Home, “A Look at the Season’s Main Events: Winter,” Center for Northern Woodlands Education, a publication of Vermont Fish and Wildlife, 2008
** Information from a column by Joe Klopfenstein, DVM, Addison Independent