TOWN MEETING: Our Democracy at Work

From the Front Lines: Voices From the Countryside 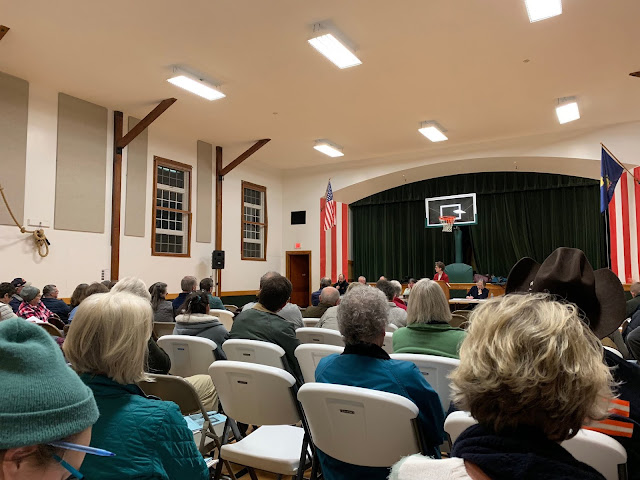 I read today that town meetings in our smaller towns are better attended than in larger towns.  I get that.  It’s the feeling that you could have an effect on things in small settings that spurs attendance. And you are more likely to know the people running things. This year was different in one way because the usual big ticket item–translation: expenditure–was not on the agenda because of school consolidation and was dealt with separately.  It left us with much less to argue about. Almost nothing, really. (Imagine!)

Just like in the high school assemblies I remember–in this case a gym doing double duty as an auditorium, or maybe it’s an auditorium doing double duty as a gym–hardly anyone choses to sit up front.  The further back, the more of us there are.  This way we have a view of who’s who and who’s saying what. In the last row, especially, the row I’m in, we feel free to whisper about the proceedings or snicker without annoying anyone.

A lady of 90 who has done a lot for the town is lauded. The Town Report is dedicated to her. She served on many committees and restored (single-handedly?) the town cemetery. She loved to mow, and kept the cemetery grounds mowed.  The person next to me tells me this lady mowed herlawn.  This honoree is, however, not in attendance.  (“Why isn’t she here? Is she dead?” I ask my neighbor. No, I don’t think so, she replies.)  In any case, we applaud her.

The primary business of the meeting goes quickly enough.  Although everyone speaking has a tendency to wander a bit.  After all, what’s the rush?  This is how things are done here.  No one is in a rush, almost never anyway.  There’s always time to catch up about the state of affairs, the weather, what other folks are doing, and maybe around to the weather, again.

After a few opening remarks (our local legislators give brief reports. Our State Representative (Rep.) mumbles (I couldn’t hear most of what he was saying, mic or no), and then our State Senator (Dem.) gives an update of various environmental legislation (clear voice this time),we whip right through articles one and two.  No questions, no debate.  I was (almost) disappointed.  This is too easy.

But wait.  There is a question from the floor regarding articles three and four that concern (3) “creating” a Conservation Commission, and (4) ratifying actions taken while under its previous designation as the Conservation Committee. Both articles are apparently the result of some sort of bureaucratic oversight, causing the Committee status to have reverted to Committee status. (This sounds like an odd oversight, but everyone involved is a volunteer, after all, and, well, things are kind of low key here. A Library Trustee incumbent, for example, forgot to file her papers on time and is asking for votes as a write-in candidate.)

The question is being asked by a man wearing a MAGA hat, suggesting an agenda perhaps at odds with anything conservation-ish.  “What does a Conservation Commission do?” he asks mildly. He might as well add “anyway” to the end of that question, as he also wonders what such a Commission does, as in “who needs this?”  Alas, the committee member responding seems to miss the import of the question (that being the intimation that the Commission aka Committee is yet another grab for power by us elites).  He responds at some length about all that the group tries to do, like weighing in on solar array issues (a red flag for some local Trumpers, vehemently anti-solar), inviting speakers about protecting wildlife and such (odds are good that the MAGA guy is a hunter), and further that the Commission would really like to do more, have morepower if it could, although it does try to be more powerful, and, yes, could be funded by grants, instead of the town(No! No, don’t say that! many of us are muttering), but this would be daunting, and so forth.  With a budget of only $500, of course, most of the rest of us can be pretty comfortable about any kind of conservation power grab.  Remaining unsaid was how conservation groups help monitor and protect the beauty of our town for us and for the future. Alas, indeed.

I am anticipating some action from our local bête noire, a Trumper and all around thorn-in -the -side* who, having failed to win an assistant judgeship for which he had somewhat unethically campaigned (his signs read asked you to vote for asst.JUDGE TXXX, so unless you put your eyes within inches of the sign you would assume he was a judge), was running this time for Town Treasurer and not just one, but two positions on the Selectboard.  (Spoiler: He lost the county-wide asst.JUDGE position, coming in last, and came in last for all three in this vote.) A surprise! His brief candidate speech is low key, almost as if he senses, somehow, that he will lose.

A question from the floor spikes our attention: “There is automatic rifle fire every Sunday morning in church. I think something should be done about that.”  (Not an exact quote.)This is a waker-upper. We have visions of people running around shooting wildly on the town green.  (Who? Where? What?)  Well, it turns out there is a shooting range in town, one used by none other than our State Police, who are apparently fond of shooting on Sunday mornings.  Whew. After some discussion–what to do? It is the State Police, after all–a voice from the floor suggests maybe someone could ask the State Police to refrain on Sunday mornings? Problem solved!

I miss the rest of the roads-and-stuff explanation as it sounded likely to continue for a good while.  A couple of us in the back row (that’s why we were in a back row, right?) made our quiet exits.  Democracy works!

(I should mention that there are many more articles, i.e., expenditures, to vote on, most of them small and for charities, local good works and the like.  They all passed when we voted the following day.)