Same post, but I've included two-thirds of the way through the views of Lake Champlain's beautiful ice taken by Chris Huston the day he, Ben and Audrey walked to New York State.

But on the day the footprint below was made, such crystal pieces were not to be found. 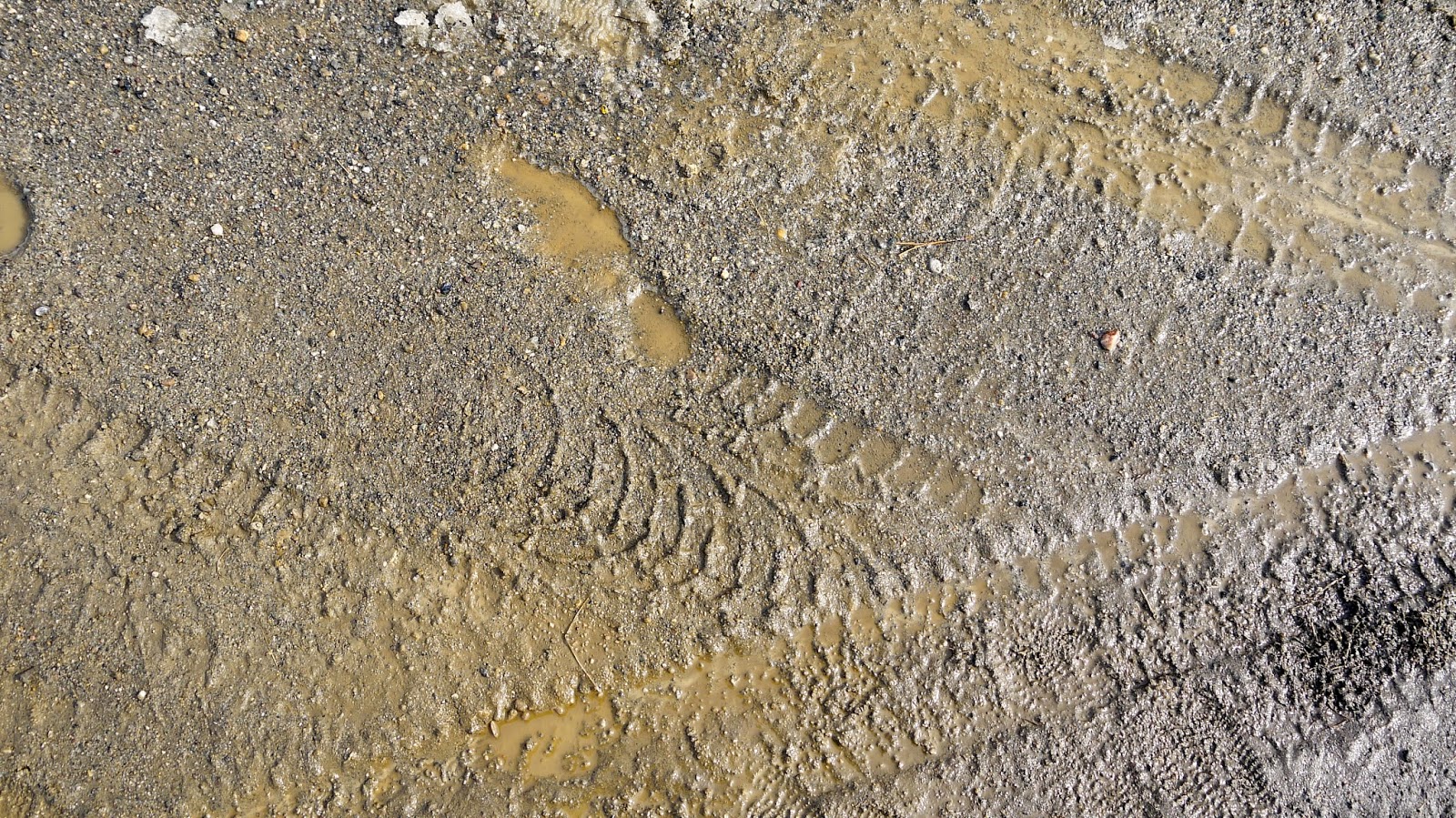 Mud season here in Vermont is not what it was.  There are still many unpaved roads but this is 2015 after all and getting stuck in the mud isn't going to happen.  Our main road is paved, so the only problem has been getting to it.  It would have been a lot easier if we remembered the location of our driveway.  Trouble was, before the first snow of the season (and that was oh so many months ago) we hadn't defined it very well with reflective markers or sticks, so Ken snowblowed its curve in somewhat the wrong direction.  Everything followed from that.  As everyone in the northeast is aware, this winter's snow once begun never really let up, so the driveway became locked into its new shape and gave us no end of trouble.  After a couple of days of fast melt we had a fresh look and swiftly realized we'd been driving over grass instead of dirt.  And where did that sharp bend at the end come from?

Drifts did it.  It was so cold and brutally windy in January and February that snowdrifts kept piling up.  We would begin driving along, curve around the pond, and then––whoops!  The snowblower couldn't cope.  For a couple of weeks we tried to keep it clear, shoveling the same snow over and over again so that we could get deliveries.  We would look out the window only to see the fuel truck try the driveway, back up, try again, and give up.  Our cars got stuck at least twice.  One obviously frustrated delivery driver tossed a package in the middle of our road and left it there.

But enough.  The melt has begun.

While it was still frozen, solid ice from shore to shore, we took a walk on Lake Champlain.  Only the week before, when the daytime temperatures were in their usual range (meaning somewhere between zero and twenty degrees), son-in-law Chris, Audrey and Ben had walked clear across the lake to the New York side.  "Further away than you think," he said.  They were lucky.  They caught the lake at a moment of great beauty:  the ice was some three feet or more thick and clear as crystal.  They marveled at bubbles formed throughout the thickness of ice that resembled galaxies in the darkness of space.  Intricate crystals sparkled in chunks of ice lying on the surface.  Here and there they saw small fish, apparently dead, frozen into the ice.  Ben lay on the ice to hear its sounds and peered into its depths.  They inspected caves on the New York side framed by gnarled tree limbs and ice.

Chris' photographs were so beautiful we had to see for ourselves.


Between the time Chris walked across the lake and the day we decided to walk there, two things happened.  First there was a brief snowstorm that dropped about two inches of snow.  The next day the temperature suddenly soared (anything nearing 40 degrees is regarded as "soaring").  The result was a surface suddenly opaque, revealing nothing.


Yet here, thanks to Chris who took these photos, is the ice as we would like to have seen it, just two days earlier: 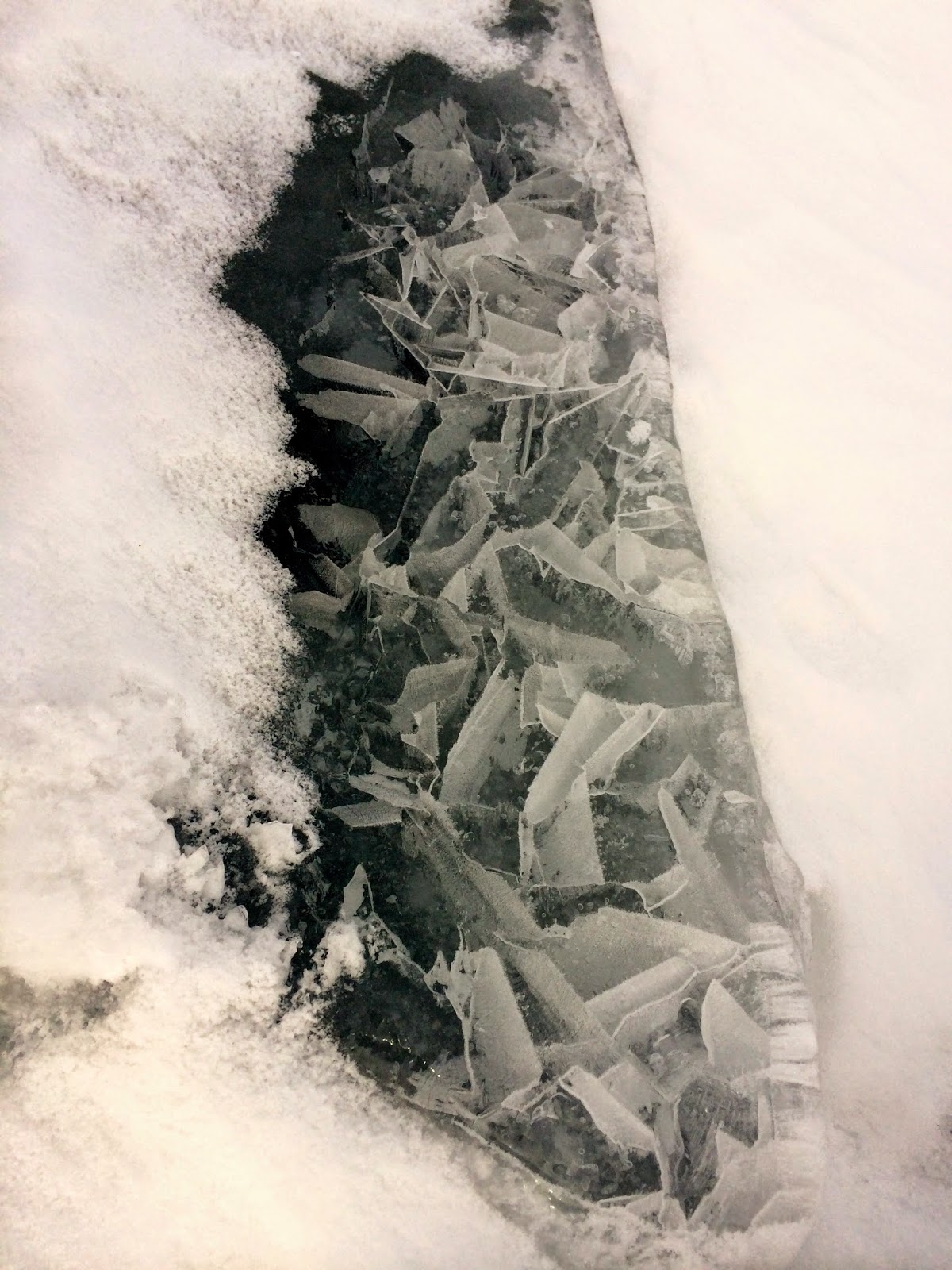 Still, we can't complain.  The winter has been perfect for cross country skiing just about everywhere.  I've heard people say that it's been a winter "like the old days," when the snow was always around until spring.  Maybe it was.

Enough of winter.  It's time to prune the apple trees.  Time to put the tap in the sugar maples.