BACK IN ANOTHER COUNTRY: AFTER AMAZONIA

The landscape is so compelling right now that a routine errand like a trip to the supermarket becomes a scenic drive––look at that tree! look at the light!  Even a visit to the dentist brings about the kind of conversation where the subject is the magnificent colors and swirling clouds he saw this morning. It’s so beautiful, he says, that “sometimes you just have to pinch yourself.”  Even in the rain the forest seem to glow.  I don’t remember it being this beautiful last year.  Maybe it was, but maybe we were too distracted by the images of hurricane Irene.

We have been back from the Amazon for several weeks now.  There’s been plenty of time to readjust to the cool, the early frosts, the lingering sunsets.  And the wind.  There isn’t much wind in the Amazon, a fact that was unexpected, to me, anyway.  But when you think about it, why should there be? There isn’t much weather, no temperature-changing fronts charging through.  It rains, and then the blazing sun is out again.  There is heat and humidity.  Iquitos is three degrees south of the equator.  When were there in late September it was well into the dry season.  (The river flooding won’t begin again until near the end of the year.) 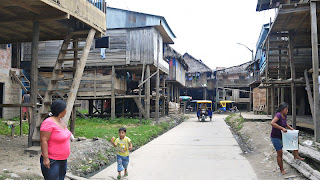 I hadn’t thought much about what it might have been like to visit Iquitos when the season was transitioning from wet to dry.  The big wet took a leap of imagination, but you could picture it:    Lots of rain, the river doubled in width, the streets in low areas functioning as rivers.  Had we been there in the wet we would have visited many sites by boat instead of on foot, including Belén, home to some 25,000 people, among them new arrivals from the jungle, joining the poorest of the poor.  (Our chance guide to Belén had lived there before he worked his way into better circumstances.)  From the water we would have seen its houses on stilts and the houses on balsa logs, now actually afloat.  A commentator (“Iquitosman”* on TripAdvisor) wrote cheerfully, “When the water is navigable, a canoe tour is oddly enjoyable––kind of like Venice on a budget!”  But he knows better, and more, and goes on to describe how “the yearly floodwaters carry the human waste from the open sewage ditches into the lower levels of the houses and vendor areas. The children swim and play while the ladies wash clothes and dishes on the same floating raft as the outhouse.”  Worse yet is the interlude between the wet and the dry:  “The hardest time is when the water is too shallow for the canoe, but ankle deep in slime and (the) contaminated mud hasn't dried completely. When the families begin to clean out the ground level to move back in, the bacteria-contaminated dust fills their lungs and the sickness continues.   If you visit from February through June, you will likely see some stage of water-related difficulty.” 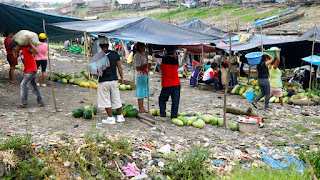 "What will you see?" he asks.  "Thousands of people, doing the best they can, living the only way they know how.  The poorest of the poor live  there but many have figured out a way to make a better-than-average income; commerce has developed over the years and the innovative people have capitalized on the local needs, and learned how to carve out an existence."  Yet:  "The thieves are as common as the water-borne bacteria.  Even the locals will warn you to hide your camera, sunglasses, or watch while descending into a place that will shock your senses and make you question the balance of your own life and social responsibilities." 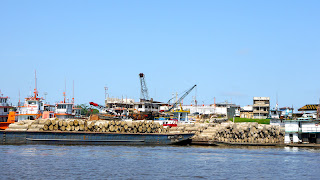 Life is precarious in the Amazon, as elsewhere.  What if the wet season doesn’t last as long as usual?  (Two year ago there was a drought, in Amazonian terms, leaving smaller streams unnavigable.)  What if the waters rise more than normal?  (Last year they rose well above normal, flooding houses that were never flooded before.)  What of the effect of continued logging in unprotected areas?  (We saw the piles of logs awaiting transport along the Iquitos docks.  And we've read about what happens in Brazil.)  What are the limits of growth of a city like Iquitos (growing mightily as people seek better lives, already at 600,000+), and how does protecting the environment fit into a culture of poverty?

We are so far from Belén.

As I write this we are having a bit of “the wet,” a day of heavy rain, but that will only mean that our pond water is high again for the first time in many months.  This land doesn’t seem nearly as fragile.  That’s how it feels, anyway, after being in a place where terra firma is not always to be found.

On the subject, more or less of fragility, a segue:  Sure, weather and extremes brought about by climate change leave people vulnerable.  So, too, of course, the acts of people.  A few months ago I was impressed with a book by Eliza Griswold (a fellow at the New America Foundation and a former Nieman Fellow at Harvard) called “The Tenth Parallel.”   While it is about the collisions between Islam and Christianity in many parts of the world (and the huge role of evangelicals in US foreign policy), I was struck by the extreme vulnerability of many thousands of people to violence liable to explode at any moment at the least perceived ethnic or religious provocation, but actually grounded in cynical politics.  So many, in so many places, living their lives on the edges of their seats.  Homes, livelihoods, harvests––everything is precarious.

It’s very far away from here.

*A little investigation suggests that "Iquitosman" is an expatriate American, married to a Peruvian, named Paul Opp, formerly a businessman from Washington State who founded an NGO called People of Peru Project (POPP), and lives in Iquitos.   He recommends a photo essay about Belén:
http://jakelyell.com/2007/07/16/water-borne-poverty-a-photo-essay-from-the-peruvian-amazon-basin/