In all the years I lived in New York City I never had a discussion on the subway with complete strangers.  Never. Much less an intense conversation that ranged from the personal to the political.   Hard, even, to imagine.  But it happened.  On a crowded A train one mid-afternoon heading downtown from Penn Station, suitcases jammed against our legs, a man offered me his seat.  No, thanks, I replied, it feels good to stand.  The seated guy was middle-aged, blousy, overweight.  Standing closest to me was a young woman with a beautiful smile.  Once you claim your space you feel like you want to keep it, she said.  My suitcase disclosed I was either coming home or heading out of town. Coming home?  Nope, I said, I grew up here, but we were coming from Vermont.  Bernie Country!  That moved the conversation into gear.  She was a Bernie supporter.  The seated guy said he pretty much was, too.  We agreed Bernie was authentic, trustworthy, real.  She was a runner, she said, showing me her Apple watch timer.  She planned to vote for Hillary in November, because it was also important to elect a woman.  The seated guy enthusiastically agreed with all our statements nodding yes, yes.  He began to fire off a bunch of questions to the young woman and me­­––Ken stood out of hearing range––like, did we really think Bernie could win?  Didn’t we agree this political scene was totally crazy?  Wasn’t Trump awful?  Did we agree with Apple or with the government about unlocking the Apple phone?  (We sided with Apple.)  Our responses were mostly in sync, as if we already knew each other.  He continued:  Did we agree Reagan wasn’t actually a good president?  How about what happened in Lebanon?  The guy’s timeframe kept retreating:  What did we think of Jimmy Carter?  (Probably the best post-president of all time, we responded.)  I began to wonder if maybe he had no one else to talk to and wanted to try out his whole line of political thought.  This conversation needed to be continued in a bar, I thought. But our station appeared before we got beyond the Carter administration, and we had to wave goodbye.

Downtown on West Broadway one day we passed a demonstration headed toward City Hall.  It was a “Black Lives Matter” protest, with several hundred people marching and solid police presence on the sidelines as well as fore and aft.  Participants were almost all white.  Black police officers outnumbered black marchers.  Following the “Black Lives Matter” a bunch of signs appeared reading “Bernie,” and “Bernie for Women” plus a mystifying (to me, anyway) anti-Hillary sign reading something like “Hillary = Saudis” or “Hillary and Saudis.”  Was this a Bernie rally or a co-opted Black Lives Matter rally?


Politics of a kind were at the Whitney Museum too.  Indirectly.  One of the floors of the terrific new building is entirely open, the largest open uncolumned interior space in the city.  At first you wonder what the exhibit could possibly be as there is nothing but the space itself.  The installation, however, is sound.  People in the room create background sounds, but from above, from everywhere, there is ambient sound––actually the recorded sounds of a Sing Sing prison block.  Prison sounds are loud, clangy, with people yelling.  Consider:  both prisons and museums have increased greatly in number in recent years.  One represents the loss of freedom, time limits, physical limits, punishment, ugliness.  The other represents freedom, space, pleasure, beauty, the breaking of barriers.

Sunday morning is quiet in New York.  Well, quieter.  When it’s a beautiful day there is no better time to walk across the Brooklyn Bridge.  I thought I hadn’t walked it before, although I’d driven across a couple of times.  But actually I must have walked it,  because I remembered walking on wooden planks.  It seems fitting that on an old bridge the walkway is wood. 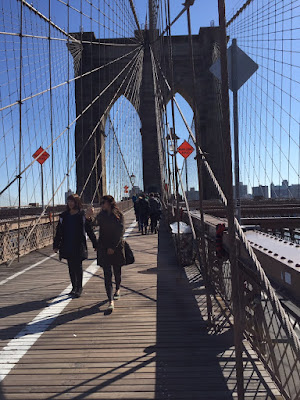 With time to kill the day we were to take the train back we walked a few blocks further downtown from our hotel and found ourselves at the World Trade Center.  We were here in early October 2001, when the debris of the collapsed towers hadn’t yet been cleaned up.  Tourists were still taking photos of themselves hugging firefighters and police.  A strange smell was still in the air and dust lined the street and filled nearby shop windows. A jagged piece of one of the Trade Center’s outer wall was was sticking out some twenty or thirty feet in the air rom a pile of debris.  Left as it was I thought it would make a great memorial. What we have in place now is much different.  When we were here last the new WTC building was still under construction and the museum hadn’t yet opened.  We had  looked at the two square holes, spooky then as now, the waterfalls disappearing into an unfathomable dark pit.  The new museum building captures something of this feeling in its downward slant, as if it were sinking.


The white wings of the new PATH (Port Authority) train station are dramatic, even flamboyant.  I’m not sure how I feel about them.  The project, only just officially unveiled, was called the most expensive train station in the world in an article in the New York Times:  “Santiago Calatrava's Transit Hub Is a Soaring Symbol of a Boondoggle.”  One can understand why.  It cost nearly $4 billion (billion!) and serves fewer commuters than Grand Central Station (46,000 compared with 208,000, daily).  Penn Station, where our train arrived, is a complete joke architecturally.  Actually there isn’t even a building. The once magnificent station completed in 1910 was very grand, inspired by the Paris’ Gare d’Orsay.  Alas, it was deemed too grand in the 1950’s for a declining railroad industry and was completely demolished.   (What were they thinking?  No more trains at all?  Ever?) When you arrive you’re already underground, so you simply exit from the train into the subway. Or climb up to street level.  Madison Square Garden looms somewhere vaguely overhead.  Penn Station serves over 600,000 people daily, and is the busiest transportation hub in all of North America.   You would think it could have some presence above ground.