NOTES FROM [what was] A FAR SIDE OF THE WORLD: Galapagos

It was December, the beginning of the warm season and at the cusp of the wet and really hot.  The water temperature was already 82 degrees.  (Don’t come here in February!)  Following on a couple of days in Quito we were on a 15-passenger ship that visited probably half (I lost count) of the 18 islands that make up the archipelago. Like everyone else before us, we were drawn there because of the unique wildlife of the Galapagos.  Darwin’s 1835 visit had put the place on the map for most of us.  We saw pelicans, boobies, sea lions, iguanas, penguins, tortoises and sea turtles practically within hours of our arrival, and crabs with the delightful name, sallylightfoot.  Snorkeling and panga rides later on added sharks, rays, many varieties of fish, more sea lions.

What interested me as much, maybe even more than the wildlife, was the cataclysmic geology and the human history minus Darwin.

Errant winds brought the first human visitors to these volcanic islands.  Until the early 1500’s the fish and birds and reptiles had the place all to themselves.  Those were probably the Golden Years.  Except for the fluctuations of climate, occasional volcanic lava flows that burnt unsuspecting iguanas to a crisp or singed sea lions swept into hot water, life pretty much went on as it always had. Today 26,000 people live in the Galapagos.

It was publicity that put the islands on the map, literally.  Ships may have been blown off course for accidental visits in the early 1500’s or even before, but none left word of their impressions until 1535 when a ship aiming for Peru and carrying a notable, the Bishop of Panama, drifted to the islands, desperately short of water.  Water was then, as now, a rare commodity on the islands (the highlands are moist, but because the soil is so permeable hardly any of it remains on the surface) and after exploration of several islands water was eventually found.  The significance of his visit was the letter he sent to King Charles of Spain in which he described the islands.  (“Giant tortoises,” he wrote, “with shells shaped like riding saddles”––galapagos in Spanish.)  With that, the islands had been officially discovered.  It wasn’t long before there was a world map including “Insular de los Galapagos.”

And it didn’t take long for commercial interests to find their way to the islands, especially Floreana because it was known to have water.  By the 1700’s the Galapagos had become a base for pirates.  (As the local name Buccaneer Cove reminds us.)  By the late 1700’s and well into the 1800’s pirates were largely replaced by whalers.  Herman Melville visited.  A cabin boy from the Nantucket whaler Essex, source material for Moby Dick, set fire to Floreana Island in 1819 in the dry season just for fun. It burned for days, if not weeks.  The first known permanent human resident on the Galapagos was an Irish sailor who was deposited onto Floreana Island by his whaling shipmates. Becoming virtually feral, he managed to survive for three years by growing vegetables and trading with visiting whalers before finally stealing an open boat and navigating the 500-plus miles to the mainland.

In this pre-environmentally inclined world it was all there for the taking:  iguanas, birds, sea turtles, tortoises.  No creature offered resistance.  One of the amazing characteristics of giant tortoises is not only that they live incredibly long,* but that they can survive for many months without either food or water, inadvertently providing the ideal food storage material for ships sailing on what were often year-long voyages: Stack them in the hold and use as needed.  The tortoise population, once over 250,000, never recovered.  Making things worse, whalers introduced goats, letting them loose on several of the islands, the idea being to recover them as needed, another blow to the environment and tortoises in particular.  There are still goats on some islands.**

A British whaler set up a mail barrel on Floreana Island in the 1700's.  That there was a need for an exchange of mail says much about the numbers of visiting ships in that day.  Anchoring ships were easily spotted from the hills behind what is now called Post Office Bay.  The barrel––replaced of course many times since the 1700’s––is today a drop-off for tourist postcards intended to be hand-delivered in the same spirit.

The nineteenth century and the beginning of the twentieth was no kinder to the Galapagos.  Prisoners were sent there in the style of France's Devils Island.  Immigration from the mainland brought with it more building, overfishing, and introduced species like rats, cats (we saw one feral cat), and dogs.  Current invasives include fire ants, fruit flies, and a kind of wasp.

Other miscellaneous insults to the islands included the US Navy using a few of them as a base to protect the Panama Canal during WWI.  Around that time Ecuador, pressed for cash, tried to sell the islands.  (Our guide said the current president had expressed a similar idea, only this time the potential buyer was China to which country Ecuador is indebted.)  During WWII the US Air Force used at least one lava cone for bombing practice.  Known as Pinnacle Rock, much of it still stands.


Publicity, beginning with the Bishop of Panama’s letter to the King of Spain, has rarely done the Galapagos any favors.  In the early 1900’s an article appeared in a Norwegian newspaper about the fishing potential in the islands.  Over 1,000 Norwegians soon showed up in the Galapagos to make their fortunes in the fishing industry.  By the end of their first year almost all of them had returned to Norway.  Stories about other potential money-making projects drew unsavory characters.  Some attempted to grow sugar cane and exploit lichen, others to mine guano and sulfur.  For one reason or another, all of these schemes ended in failure, even murder.

We heard the following story (and watched a documentary on board ship about it.  It happened on Floreana):

In 1929 an article appeared in a German newspaper about the Galapagos, this “paradise” at the far side of the world.  It attracted a couple that longed for an “Eden” where they could live apart from the rest of the civilized world, and, interestingly, apart from their respective spouses.  They were a strange pair:  Ritter, a doctor with the philosophy of Nietzsche on his mind, and Dora Strauch, his lover and devotee.  Newspaper stories back in Germany of their settlement on the island of Floreana attracted the attention of yet another family––the Wittmers, husband, pregnant wife, and teenage son––who also felt a desire to return to nature.  So two years later they too made their way to Floreana.  Alas, they did not make good neighbors, as the initial pair had not planned on having neighbors at all.  There were severe tensions right from the start.  All too soon a truly weird addition joined Into this emotional mix:  an Austrian “baroness” (self identified as such, but possibly a dancer in a previous life) arrived accompanied by three men, one an Ecuadorian laborer, two or perhaps all three of them her lovers.  Often brandishing a whip and a pistol she began to play a role as the self-proclaimed queen of Floreana, and announced plans for a luxury hotel for wealthy visitors.  This new addition to the population brought shock waves to the two already uneasy settlements.


With the baroness’ encouragement, the journalists who arrived with each passing ship elaborated on her already fanciful stories that ended up featured in the tabloid newspapers of the time.  Yachters made efforts to stop at Floreana to see the place for themselves.  But no hotel or other facilities were being built at all.  No one else came to stay, only to gawk.  The complicated relationships of the three separate parties on the island began to grow increasingly uneasy, while simultaneously becoming intertwined.  There were arguments, acts of extreme hostility, yet at the same time there was socializing, filming of one another and posing for photos.  Lorenz, one of the baroness' lovers, began to align himself with the Wittmer family, informing them that he had become a slave in the baroness' household.  The Ecuadorian, meanwhile, had long since disappeared.  (Are you following this?)  One day Lorenz announced to the Wittmers that the baroness and her other lover had announced they were leaving for Tahiti on a passing ship.  No one had seen a ship, passing or otherwise.  The baroness and her lover were simply gone––disappeared.  Curiously, a scream had been heard the previous night, yet no one admitted to knowing anything.  In the baroness’ absence all her possessions remained, and the Wittmers soon appropriated many of them.  No bodies were ever found.  While all this was going on the Ritter-Strauch relationship had been deteriorating.  Unexpectedly––suddenly––Dr. Ritter was dead.  The cause was suspect:  Ritter, a vegetarian, had been poisoned by, of all things, contaminated chicken.  It had been prepared by Dora.  At this point Lorenz left the island in a hurry, having persuaded a captain to take him to the mainland on his small boat, unwilling to wait for a larger vessel.  Lorenz was never heard from again.  Several years later his and the captain’s desiccated bodies were found on a beach on the most remote of the Galapagos islands.  Dora Strauch eventually returned to Germany.  Descendants of the Wittmer family run a guest house on Floreana.  No one now alive knows for certain who murdered whom. 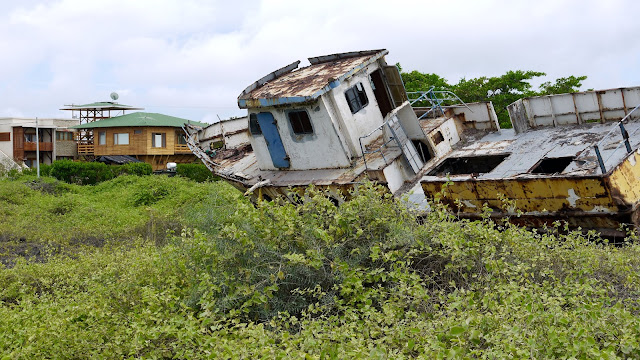 *When Darwin left the Galapagos in 1835 he took with him three young (aged 5 or so) tortoises.  Two of them died.  The third tortoise ended up in a zoo in Australia, cared for by none other than Steve Erwin, the late zany TV zoologist.  Named Harriette, the tortoise died in 2006 at age 176.

**There was a major goat culling in the 1990’s but not all goats have been killed. Goat meat is less popular than it was, removing some motivation for further culling.